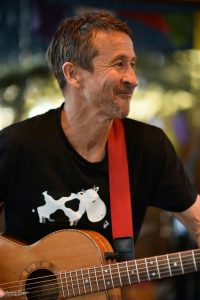 Already acclaimed throughout Europe and Australasia, Washuntara gained a sizable following across the United States following the release of his CD ‘Fierce Tenderness’ and the broad airplay of his self-penned song, Riverboat’. The new CD, The Makings and its companion DVD, A Walk in the Music, continue to delight both dedicated fans and new listeners alike.

This versatile performer and multi-instrumentalist was born in the Australian outback to a bush family rooted in traditional music. He began performing as a child and, as Brenton Roberts, reached Top Ten status in Australian and European markets with his self penned recording, ‘Man and Woman’ before heading to the USA.

Washuntara was the first ever songwriter to be awarded 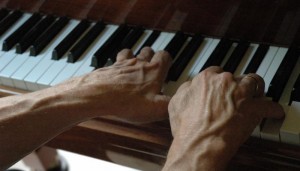 the Australian Commonwealth Exports grant, which seeded his thriving publishing house, PassionWorks Music, based on Nashville’s famous Music Row since 1995.

The Australian-published book, It’s Our Music devotes a chapter to the singer, saying: Washuntara is easily the outstanding (Australian) artist of the decade”. This has been reinforced by this world-class talent having performed with some of the worlds greatest acts, including Sir Paul McCartney, the Eagles, the Moody Blues, Keith Urban, Jerry Lee Lewis, Garth Brooks and others. He was also received with great enthusiasm by the then first lady Barbara Bush at a charity event in Washington DC.

Washuntara travels the world performing and Speaking at international events, festivals, and functions.

He’s rockin’ … A definite thumbs up!

“He recently performed a charitable benefit for the Bush family in Washington DC and his Australian singer-songwriter talents were accepted with great enthusiasm.”

From America’s diverse river of talented artists & composers, SESAC can sign virtually any artist it chooses. When we heard Washuntara, we knew he would be our major signed singer-songwriter of the year.

Washuntara is easily the outstanding solo artist of the [1980s] decade.

~ From the Australian book, It’s Our Music

To experience the cross section of Washuntara’s music and lyrics,
please browse and scroll down the player below.

Washuntara is an internationally successful award winning singer/songwriter, musician and public speaker. In addition to working on his Nashville based label, Passionworks Music, this dynamic Australian also conducts workshops and men's outreach to further his mission of "crafting lives."